Kiasma is closed due to renovation.

Jump to a section:

Landmark building in the heart of Helsinki

The Kiasma building was designed by American architect Steven Holl. His entry, Chiasma, won first prize in the 1993 architectural design competition for the museum of contemporary art from a total of 516 entries. Kiasma opened to the public on 30.5.1998.

Kiasma has galleries on five floors, connected by ramps, stairs and elevators. Apart from the galleries, there is also the Kiasma Theatre, library, restaurant and museum shop. The floor area is about 12,000 square metres, of which 9,100 are in museum use.

Light is an important element in the Kiasma building. Steven Holl was fascinated by Finnish natural light, which changes with the seasons and time of day. The surfaces and forms of the museum are designed with light in mind, and the building’s character is altered with the shifting light conditions. The interior lighting also reflects changes in natural light.

Steven Holl has said: “I’m not interested in how a building will look when it’s published in a magazine. I’m interested in what it will be like to be in, what it feels like to walk through, how it will appear and work in the city.”

The dimensions of Kiasma are based on the proportions of the human body. The basic unit is the eye-level height of 165 cm. Most of the dimensions of the building, including the height and width of spaces and the relationships of doors to walls, are golden mean multiples of that number.

The name, Kiasma, comes from Greek chiasma, meaning “crossing”. The word is used to denote the crossing of nerves and the way chromosomes twist together. Crossings and twists are an integral part of the architecture of Kiasma, notably in the lobby, where two tall concrete walls intersect. Stairs and ramps also twist along their way, taking visitors from one floor to the next. 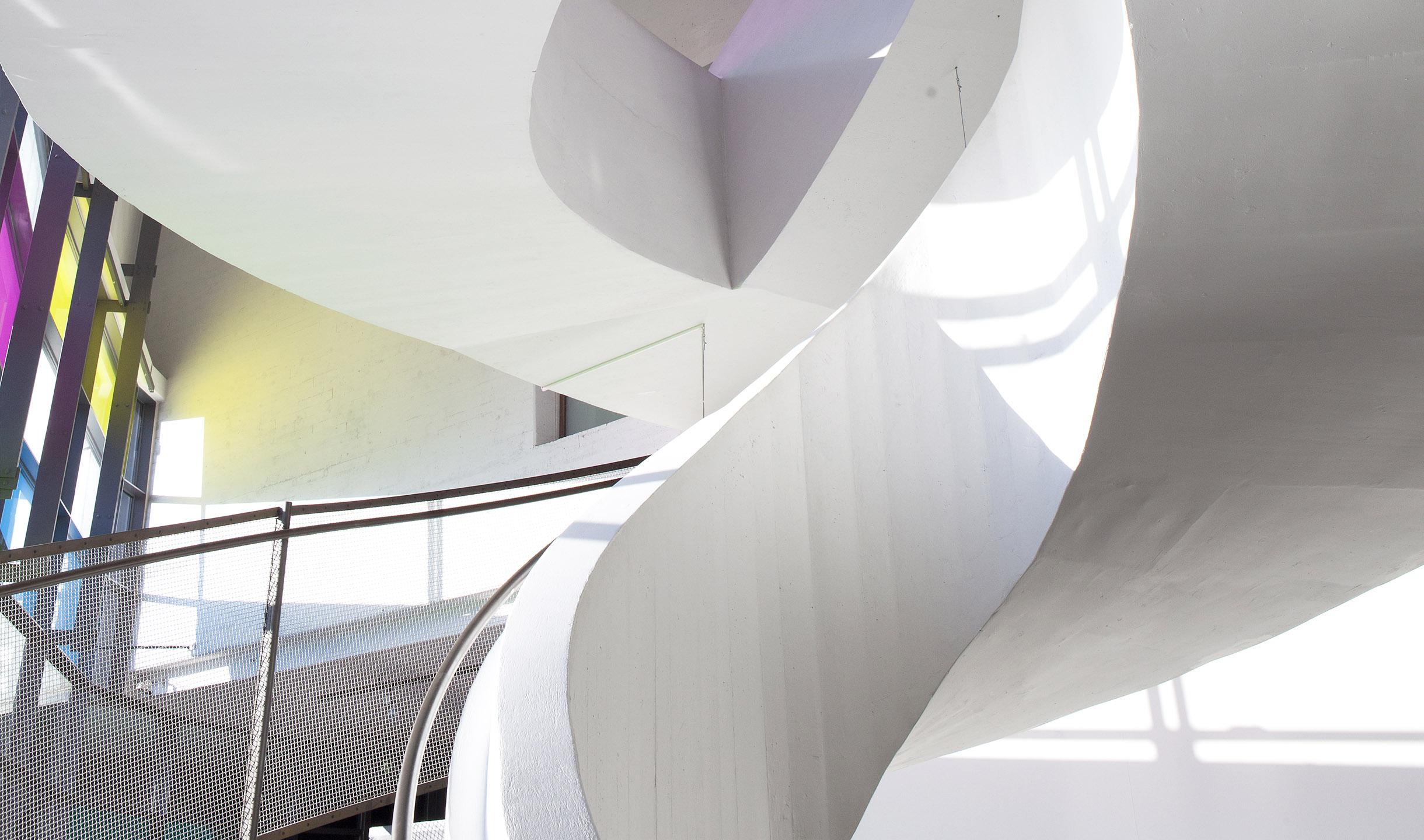 The curved roof of the building is made of patinated zinc with tiny amounts of copper and titanium.

The vertical elevations of Kiasma are made of aluminium, which is resistant to the maritime climate of Helsinki. The light-refracting surface was produced by sanding the metal by hand.

There are reddish surfaces on the south and north elevations of the building. These are made of acid-reddened brass. The same material is used in doorframes and sliding doors in the galleries.

Kiasma has 3,500 square metres of window surface. The large, curved wall facing Mannerheimintie and the partition at the front entrance are made of Reglit glass planks, most commonly used in industrial buildings. Iron oxide, which gives the planks a greenish hue, was removed from glass walls and gallery windows to ensure the purity of incoming natural light.

The curving concrete wall in the lobby was cast in place, a challenging project that won the 1997 Concrete Structure of the Year award. The vivid texture of the wall comes from the horizontal imprint of the formwork. The floors in Kiasma are concrete tinted a dark grey that borders on black. A total of 7,000 cubic metres of concrete were used in the building.

The walls and ceilings in the galleries are hand-plastered to give them a texture that comes alive with light.

The interiors of Kiasma feature yellow, red, black and white plywood. The plywood walls in Kiasma Theatre are painted Pompeii red, while yellow plywood is used for the walls and large doors in the lobby.

There are pools on both sides of Kiasma that are connected by a cascade of water running alongside a passageway that cuts through the building.

Kiasma was designed by American architect Steven Holl (b. 1947. Bremerton, Washington). He has designed numerous museums around the world, including museums of natural history in Los Angeles and Copenhagen, an art museum in Nanjing, China, and the Knut Hamsun Centre in Hamarøy, Norway.

Holl is the recipient of many prestigious architecture awards. He has written about architecture and has taught architecture in several universities. He founded Steven Holl Architects in New York in 1976.